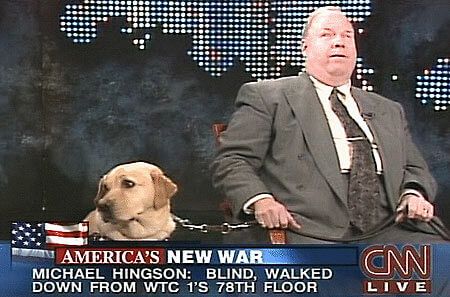 195 The Globe, the station which brought you the stream of the 2018 NFB national convention, is proud to bring you an exclusive interview with special guest Michael Hingson, well-known for his survival of the September

11 attacks along with his guide dog Roselle, as told in his 2010 book “Thunder Dog.” In this wide-ranging interview, Mike talks about his 9/11 story, his personal background, and how the philosophy of the National Federation of the Blind has shaped both his attitudes toward blindness and the approach he took during his walk down 78 floors of the burning World Trade Center-an approach which saved his life and the lives of others. He also shares some lessons from September 11 which he feels our community as well as the public at-large should take to heart. This interview is one which promises to stimulate and inspire you as you listen.

Our interview with Mike will air tomorrow, September 11, on The Blind Side, a program hosted by Chris Nusbaum which focuses on issues of interest to the blind community. You can tune into the show starting at 8:00 PM Eastern by visiting 195theglobe.com, searching for 195 The Globe in the TuneIn and ooTunes apps, or telling your Alexa or Google device to play 195 The Globe.

We hope you will tune into this one-of-a-kind interview tomorrow at 8:00 PM Eastern!

Welcome to the Radio Revolution!