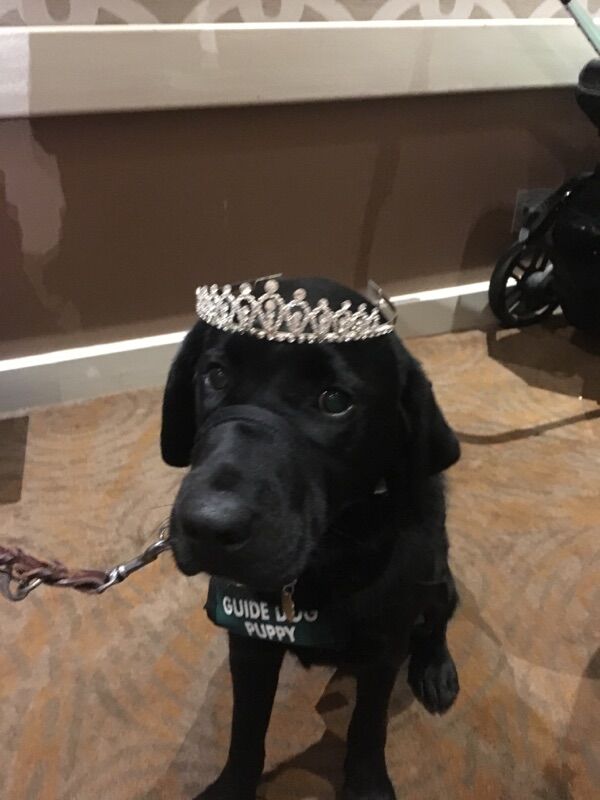 EXCITEMENT! We get to go out today! We’re sprung. No new snow.

So, we got up at the usual time and did the usual morning routine. At 7:30 we headed off to breakfast. Candace and crew were there to tell us that we would spend the day in Gresham!

At 8:15 we met, as usual, in the Fireplace room. This morning we went over the graduation procedure which is straight forward. Then we were given our binders with all the info about our new partners including medical records, puppy raiser notes and lots of other stuff we can discuss later.

At 9:10 we’re off to Gresham. The desire was to get as much work in since we had little chance earlier in the week and since this was our last day.

We started out doing “traffic checks”. These exercises involve us walking along trippingly and then, suddenly unexpected, a car comes along and does something we don’t expect. These things can include cars coming toward us, cars backing into us and cars cutting us off. Of course, and fear not, everything is controlled. Candace drove the vehicle which was, you might have guessed, a hybrid. However, it was easy enough to hear.

The idea is to give us an opportunity to see how our dogs react when crazy drivers do those crazy things they do especially when they are not paying attention to pedestrians. When a car simply cuts of off the dogs will stop, and possibly back up a step. When we are walking along, and a car comes in front of us such as the vehicle coming out of a driveway we are trying to cross, the dog will stop and back up. If a car is stopped in an intersection and is sticking out into the cross walk, as many cars are prone to do because drivers don’t pay attention to non-drivers, the dogs will stop and wait for direction unless they believe there is a clear path to move past the vehicle. The dogs have received considerable training in dealing with traffic, but this is the first time we have had the opportunity to see them in action. On the way back from the route we made our final stop at iCandy to buy a gift for Karen and a final stash to share and to take home.

After the traffic walk and lunch it was off again to do a route at a Safeway store which bordered a street with heavy traffic. Sandy and I both wanted our dogs to have a walk with lots of cars moving around us on busy streets. Nancy had the perfect place in mind as we learned. One street we crossed had seven lanes of traffic and an off-set curb which meant that we could not expect to simply walk straight across the street. Also, the road was wide enough that we had to stop at an island in the middle which also had off-set curbs. Both dogs did great.

On our way back to GDB we stopped at a Hallmark store, so Sandy and I could buy some gifts for our puppy raisers. I got two picture frames for Andrea and Ceci so that when they received the official photo of Alamo and me they would be able to frame the picture and remember us.

We got back to the dorm around 4PM, just in time to water, feed and relieve the pups. Then it was off to a spaghetti dinner for us. After dinner Sue, the dorm RA for the evening, went again over the graduation process as well as some final travel arrangements. After the lecture I spent some time with /Alamo and then went off to bed. I put off packing until Saturday since I would not be leaving GDB until 6/AM on Sunday. I learned that Sue will be driving me to the airport. I look forward to having time to chat with her and to getting to know her better.