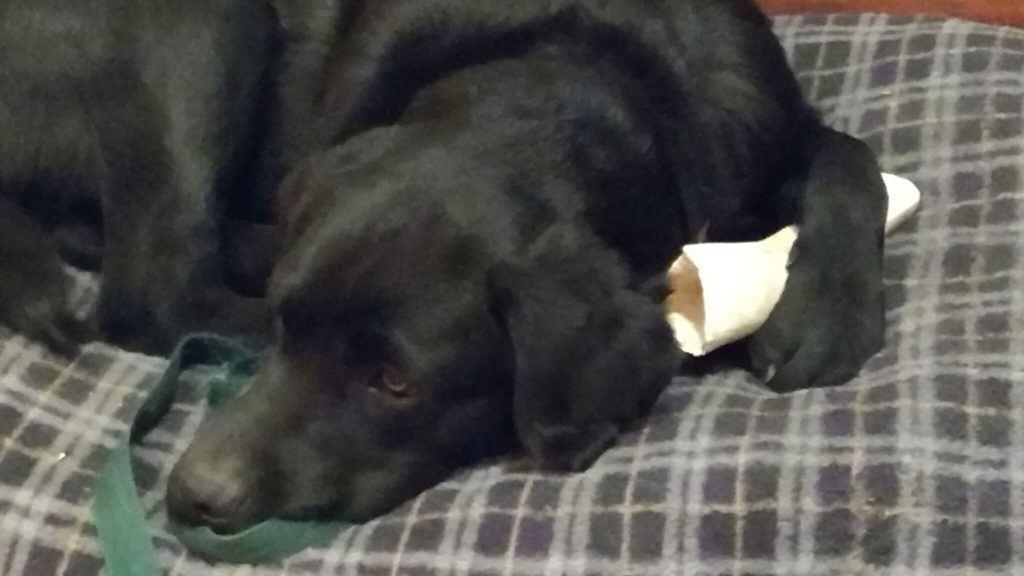 Alamo on his bed with his paw holding his bone

Happy day! No snow last night. We did have a bit of a modified day, but much better than the past few days. Staff came in at 10AM so we got a bit of a late start.

At 9:30AM we met in the Fireplace room to go over the “theory test” Candace sent us yesterday. The purpose of the 20-question test was to see if we consistently answered any question incorrectly which would indicate that the instructors needed to go into more detail on a subject. Also, if many people throughout several classes missed a question then even more there would be an indication that something needed better coverage in the curriculum.

After going over the test we traveled again the route around the school. This time we had a terrific dog distraction awaiting us on our way to the Kennel kitchen. Nancy brought her 5-year old great Dane, Jeep, to try to distract us. There wasn’t much doubt of Jeep’s ability to distract. The only question was how difficult it would be to have our dogs regain their focus. Jeep loves to interact with other dogs and is quite energetic compared to many dogs. Alamo did well. After being distracted he refocused and was able to work past Jeep and go on his/our way. Good boy Alamo.

The rest of the route was uneventful for us.

Finally, after lunch we got to go off campus. First, we went to another Fred Meyers grocery store. This one was a two-story affair with an escalator we used for practice. Alamo did great not only on the moving stairs but throughout the entire route. We did brush against a woman and so we reworked that segment. I asked the lady to stay where she was explaining that her help would give me an opportunity to better train my guide. She was all apologetic even though she was not the problem. She did agree to stay put while we moved back and then approached her again. This time Alamo gave her lots of clearance and we all went on our merry ways. Of course, Alamo got food rewards for working right the second time. Food rewards are, as I have said before, one of the most powerful incentives a dog can get.

After working through Fred Meyers, we traveled to the Gresham Station mall where we did another walk. There were lots of curvy sidewalks and good curbs to test the dogs. It also was quite cold with temperatures probably at most in the high 30s. Having lived in the East twice I am familiar with the cold, but I’ll take warmer California weather any day. Sorry Oregon even if you mostly still have people to pump gas it’s not enough of an inducement to move up here. (grin)

After the station we took a side trip to the local Pet Smart store. The we included me and Alamo, Sandy and Yukon, and our wonderful instructor, Nancy. Oh yes, we discovered that Nancy did indeed visit one of the local watering holes yesterday since she couldn’t make it to Boring. She also discovered that there are ten bars in her area. We originally were told that there were only seven. Someone spent their day off in the snow wisely.

At Pet Smart OI bought a nice squeaky ball for Alamo. This thing has lots of different squeaky sounds to keep him entertained.

We came back in time to feed the pups and head off to dinner. There were no lectures this evening. However, GDB has arranged for someone to come out once during each class to give massages to anyone who wishes them. The cost is a dollar a minute. Not bad. I capped off the evening with a 20-minute massage. Life is good now.

That’s my report for today. Tomorrow, unless there is an unexpected snow fall, we will have a full day of travel around Gresham including traffic checks, more on that tomorrow, possible light rail travel and who knows what else. Tune in tomorrow for the next chapter.