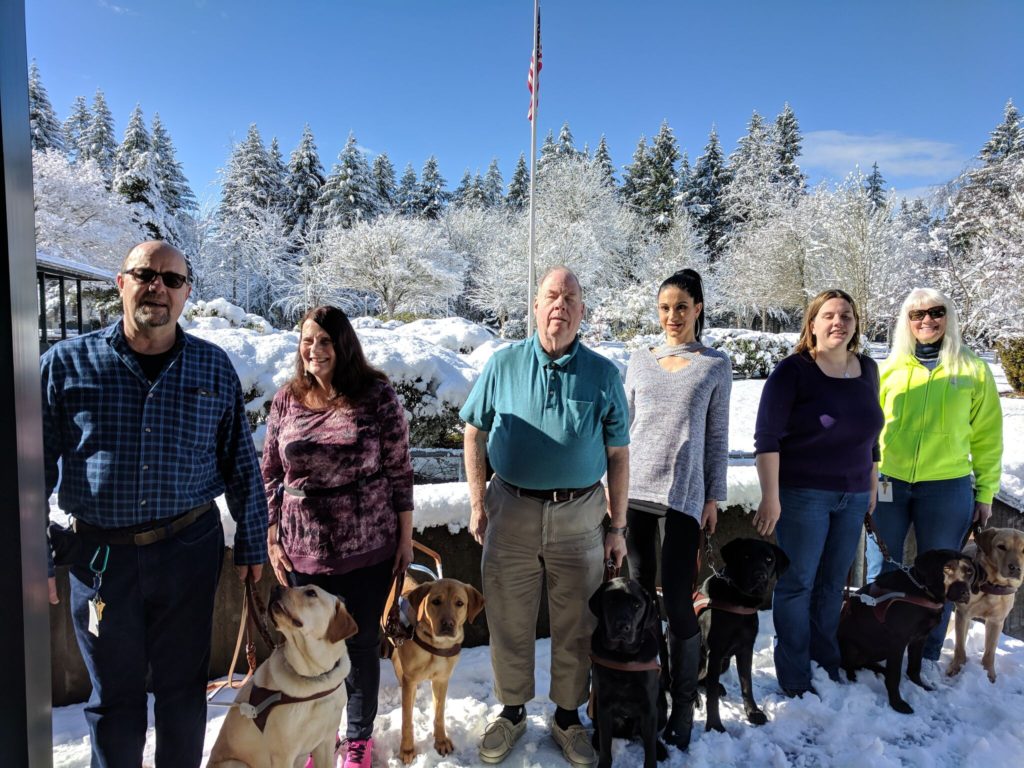 Class Picture taken in the snow.

Is this class lucky or what? It snowed again this morning. We expected snow tonight, but the weather pundits were off by twelve hours and we began getting snow at around 6AM this morning. We got enough by breakfast that the schedule again was thrown out the window. No travels to Portland or to Gresham. GDB leadership all the way to the top of the Oregon campus, Susan Armstrong, decided that it would not be safe to leave campus. For my part, I agree. Sidewalks were treacherous.

So, we stayed here and did a number of activities on campus. The first thing we did was to take a class photo. When I get it I will pass it along.

The next activity was a series of obedience games. Task one was to put our dogs in a sit-stay position and see how long they would stay without moving. The process was that we told our dogs to “heal” which meant, as you now know, to come around on our left sides and sit. We put our leashes into the long configuration and walked away from our pups while telling them to “stay.

We were divided into two groups of three. The dog/person team who stayed in position the longest would win a prize. Our first dog out of three stayed for a bit over four minutes and then moved. Mr. Alamo stayed in position for 7 minutes and 46 seconds before blinking. So, we lost, but I bet not by much. Fernando, Steve’s dog, was thus the winner.

The next game was a contest between Fernando and the other team winner to see who was the fastest at going from a standing position to a full down. Fernando won that one.

Next was a contest to see which dog would do a full come to their person the fastest. I forget who won that one.

The most fun contest consisted of the person holding a big spoon. At first a Cong was put into the spoon and the person with dog had to walk about 30 feet while keeping the Cong in the spoon and without the dog being distracted. All of us did that one.

Next a soccer ball replaced the Cong and, again, we had to walk about 30 feet. Unfortunately, the ball slipped off my spoon, but Alamo stayed fully focused.

All of this was to have fun, but it also gave everyone to see these dogs stay focused and not distracted.

After the Winter Obedience Games, we took a walk around a route on campus that took us from the dorm, through the kennel kitchen which included a visit with the campus cat, Chester. This cat could care less about the dogs. In typical cat fashion mostly, he turned his back on the dogs and walked away. Alamo did extremely well and could care less about the cat. I guess that comes from living around four cats as he was growing up.

After leaving the kennel kitchen we walked to the administration building. Along the way we went up and down some stairs. In the Admin building we took an elevator to the third floor where we were to find one of the two local candy jars. The one on the third floor had nothing of interest for yours truly. We then took the elevator down one floor and located the higher quality candy jar outside the office of the director of training, Cheryl Vincent. Here I discovered a KitKat bar which I snagged.

From the administration building we traveled back to the dorm. The entire route including stairs, ramps and elevators took about 20 minutes.

After lunch we repeated the route, this time in a bit heavier snow. By this time the campus closed, and most people went home. Only three of the instructors remained, and one of them, Katie, spent the afternoon helping in the kennel. So, it took a bit of time to get all of us through the route.

The walk took most of the afternoon. After dinner we repeated the route as a night walk to give us and our dogs practice at traveling in the night time. Alamo did well.

So, there you have today’s report. It is snowing as I write this. We do not yet know what the weather will bring tomorrow. Stay tuned to read what happens tomorrow.

Oh yes, I should tell you about Joy Ross who I mentioned earlier. Joy has a very active YouTube channel. Here is a link to an interview she and I did which she posted on her channel today,
https://www.youtube.com/watch?v=WGiR5LUAHg4. Enjoy.