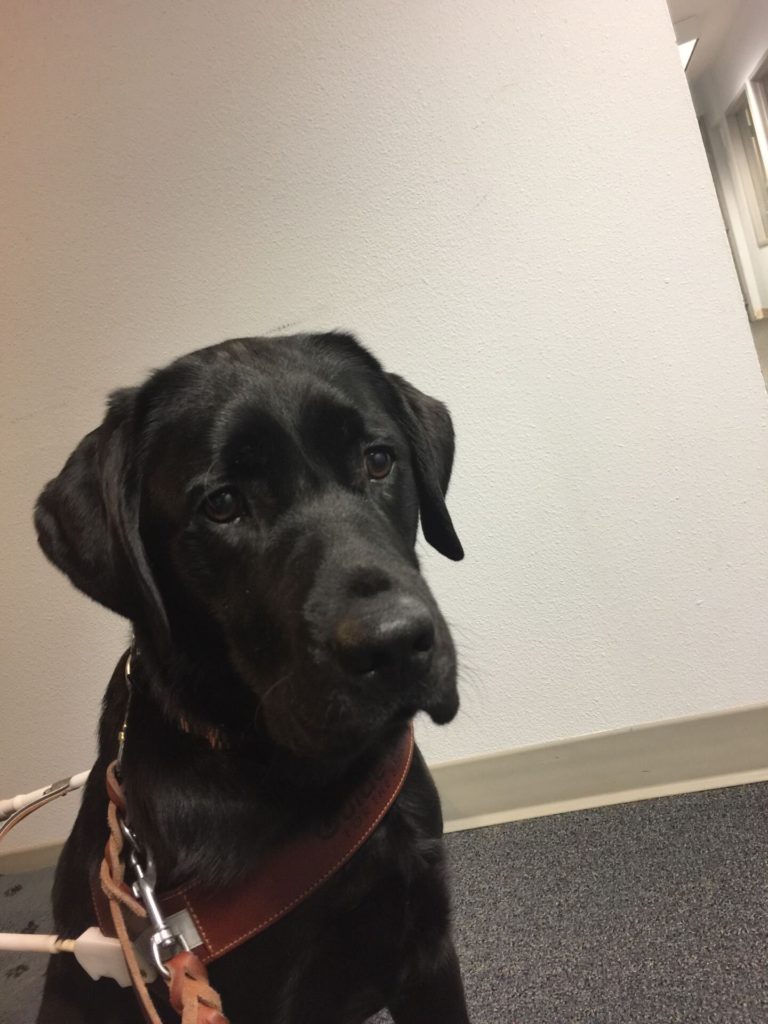 Here it is the day after Valentines day and all is pretty good with our world. I won’t comment on the world as a whole; too many crazy things going on.

We were up at the usual 0 dark 30, (6AM) to get ready for the day. I think Puppy and I are settling into a good routine. He is eating a bit faster even with the stuff GDB is putting into the afternoon feeding to prevent loose stool. Even so, he is not the eating terror I see in Fantasia and Africa. When I get home, I suspect I will feed him separately from Fantasia just to keep his intake pace at a moderate level and thus not permit him to become fearful that the other dog will grab his food.

Breakfast over by 8AM and we all trooped to the Fireplace room for more lectures. This time again we reviewed moving turns and, we discussed potential guide dog errors and what to do about them. The bottom line, when a guide dog makes an error, yes it happens more often than dog lovers would like to admit, we stop and address the issue if we can. I won’t go into all the techniques here. Suffice it to say we are not going to spend much time correcting and reworking errors in the middle of a street. We might totally rework a street crossing, but error discussions with our dogs won’t happen with cars wising around us while in the street. I do think it won’t hurt some drivers to wait while we rework something, but cars are bitter than us, so we will get out of their way and then address issues. For my part I can’t wait for every driver to be replaced by an autonomous vehicle. It is high time for driving to be taken out of the hands of humans. (Let’s see what sighted drivers think of that!)

We went to downtown Gresham again after lectures. We had a morning route around the same track as we have experienced over the past few days. After lunch we did one more walk and then all traveled with our pups to Target to get in a little building work and to do a bit of shopping. Puppy and I had a fine time in the store. However, some other students did not. Here is what happened.

Some students were shopping with trainers when a large dog, someone said around 60 pounds, jumped out of a shopping cart and ran at one of the guide dogs. The dog had no leash nor collar. It was chased through part of the store. I do not know what happened to the dog.

All these incidents took place inside the store. When a staff member was asked why nothing was done the staff member said that they were not allowed to do anything even ask if the animals were service animals.

Under the Americans With Disabilities Act shop owners and staff do have the right to expect that service dogs will be well behaved in stores. A service animal is one that has specific training to help mitigate a decreased life function such as eye sight. The shop people absolutely have the right to expel any animal that is not well behaved. In fact, in my opinion, they have an obligation to do so. Anyway, this was an unfortunate incident that demonstrates just how far we still must go to provide true access and protection to persons with disabilities.

If this story weren’t enough we learned today that HR#620 passed the House of Representatives. This law which is presented under the guise of “reforming” the Americans With Disabilities Act makes it much harder to file any grievance.

Ainst any organization that discriminates against a person with a disability. Until now should an act of discrimination occur one could file a complaint and litigate to a resolution. If this bill passes there could be up to 180 days before a complaint could be filed. The claim is that there have been too many frivolous filed law suits. Bosh! There are frivolous litigations all over the place. The ADA has been in affect for 27 years and now people want to complain because they feel it is too easy to litigate?

At present no bill has, to our knowledge, been dropped in the senate. I hope it stays that way, but I have no confidence that all senators are sane. We shall see.

Anyway, after our trip to Target we returned to the GDB campus. A few minutes after Puppy and I got back to our room we were visited by the CEO of Guide Dos, Chris Benninger. I invited Chris to sit, and even encouraged her to sit on the floor so she could be properly sat upon by my do. Chris was more than happy to oblige, and Puppy was most happy to sit on her for about 15 minutes. All had a wonderful time. Chris and I had a chance to discuss various topics including the upcoming National Association of Guide Dog Users seminar to be held in July at the National Federation of the Blind convention in Orlando.

The rest of the day was calm. We had dinner at the usual time followed by a lecture. This time we discussed the GDB Alumni Association and the Veterinary Finance Program that will help aid in covering vet care costs. Dinner was just a bit different as I trotted out on my iPhone some Smuthers Brothers music just to show that comedy did exist in the 60s.

We ended the day, Puppy, and I, with a good game of tug before hitting the bed and falling to sleep at 9:30PM. Good night all.