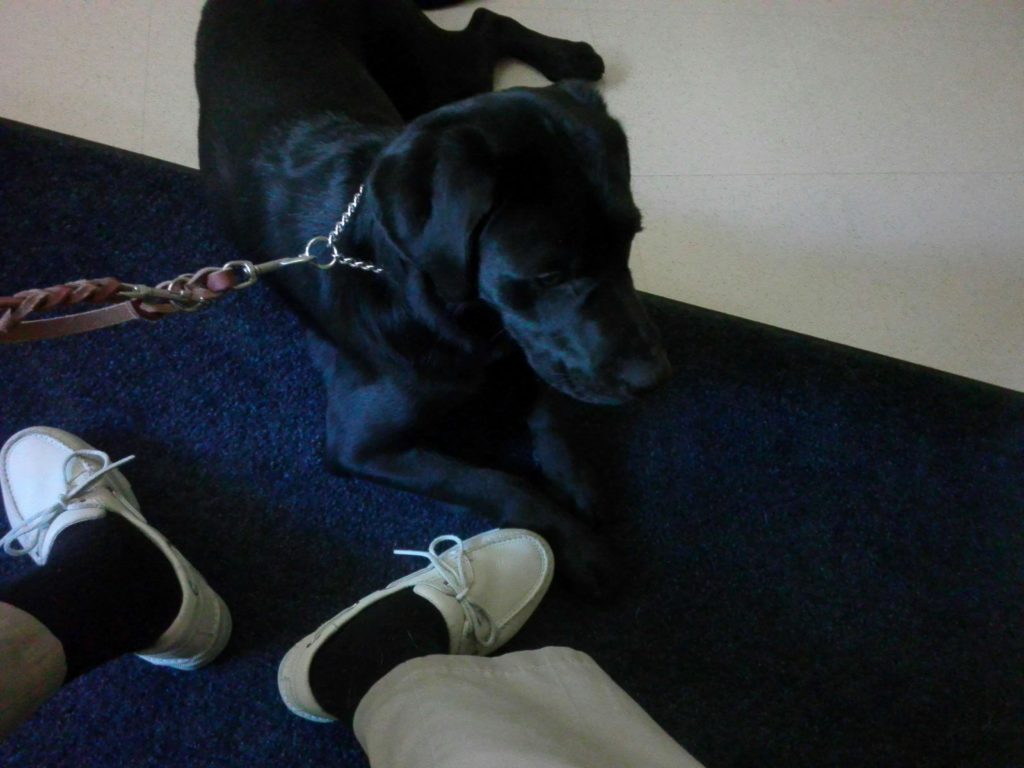 It began as a nice crisp cold day here in Boring. This morning we are up and in the dining room by 7:30AM. The plan for the day was to eat and then begin discussions and meetings with our instructors. As I mentioned before the student/instructor ratio now is two to one. My instructor is Nancy. My student team mate is Sandy.

I have known Nancy for quite a while. She accompanied Karen and me and 16 other guide dog users on an Alaskan cruise in 2004. The cruise was sponsored by GDB and was one of the first of its kind where guide dogs traveled with their handlers on a cruise on a very accepting Princess Cruise Lines. Unfortunately, Roselle had begun exhibiting symptoms of the immune related disease which later was the cause of her retirement. So, Roselle did not get to go, but instead stayed at GDB for examinations.

This class had three trainers, an early apprentice instructor and a class training supervisor, Candice. When I received Squire, my first guide, we also had a first-time apprentice, Bruce Bensler, who later became the CEO of the organization. In that class it was Bruce and a senior trainer, Jeff Locke alone who trained 12 students in a four-week class. Ah how life has changed since 1964. 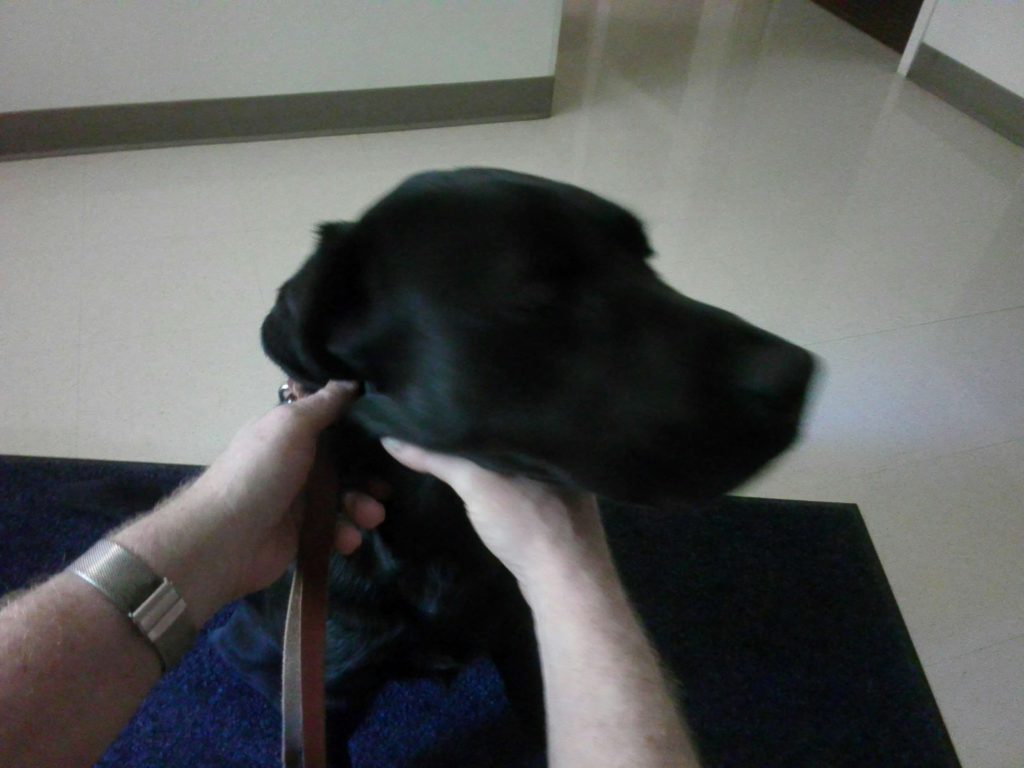 After breakfast we all adjourned to the “fire place room” for morning lectures. You can guess why the room has its name. Our first lectures centered around early work with our dogs including a new obedience regimen. Now, instead of taking dogs through a daily set of exercises including “Sit”, “Down”, Stay and “come” gdb incorporates more obedience into the core curriculum and makes the process more relaxing.

We discussed some basic differences between guide work and leash handling. For example, “heal” is not a guide command and is not given while holding the harness. Instead it is used with the leash to get the dog to position itself on the handler’s left side with the head near the handler’s left leg. The handler stands with their left foot slightly extended forward to give the dog the sign of where the handler wants the dog to be. The final part of healing is for the dog to sit in the appropriate position.

This morning we got leashes and then practiced some obedience steps with our favorite dog, Juno. Juno is the trainer holding a harness or leash depending upon whether we are doing leash or guide work. During the whole process we are taught to use food rewards for good behavior and to withhold food when something is not done properly. I did offer kibbles to Juno and simply don’t understand why she did not want the food. Fussy humans! 😊

There was plenty of time to ask questions and to discuss what we were encountering. In our class there are four retrain students and two first-timers. I lead the retrain pac with having had seven previous guides since 1964. The next one has had two previous guides. Lots of experience to help the newbies along.

After lunch we went to our rooms to wait for the famous knock on the door at which time we would receive our new dogs. Exciting times to say the least. Since I have been working with Aira, a visual interpreter for blind persons, I had my smart glasses ready, so I could get some good pictures of my dog’s arrival. Around 1:20PM the knock came. I opened the door and was greeted by a small lab whom I learned was named… Woops! I can’t tell you the name yet. What I can say is that he is a 22.5-inch tall black lab who weighs 52 pounds. I am told strictly that his weight must not deviate by more than %10 over his lifetime. I know this already and do work to make certain that my dogs stay at their fighting weight as best as I can.

I got some good shots with the help of Wendel, an Aira agent, and Pup and I spend an hour or so getting to know each other. Every dog is different and so I don’t have a real idea of how this one will behave. Squire, my first guide, met me by sniffing me all over and immediately expressing his approval. My second dog, Holland, checked out the room before finally deciding to come and greet me. It’s ok, we bonded. Linnie, my fourth, came over and as soon as I said “hi” flipped on her back for a tummy rub. Roselle, #5, came over and laid down in front of me. This one sniffed me a bit and then stood patiently wagging his tail. He looked all around the room but did not wander off. I think he was not quite sure what was happening, but he seemed game for anything.

At about 2:30 we went back down to the fireplace room practicing healing our dogs. There we practiced some obedience and discussed a few more lectures.

At 4:30 we fed and watered our new team mates. Mr. Hingson’s dog ate quite slowly, something I do not see much in labs. GDB does put some bitter powder in the evening meals for the first week to help keep loose stool down, but even so, this dog eats slow. Perhaps too much information, but this dog went out and did not relieve at all. I have seen this before. I think it was my third dog, Klondike, who did not relieve for three days. Go figure. We’ll see with this one.

We had our dinners at 5:30 then had another lecture. Right before the lecture we watered our dogs for the last time on Monday. Last outside relieving was at 8:30 and, you guessed it, Dog Hingson did nothing. I don’t think any dog relieved that day.

By 9:30 we all were in bed anticipating the events of the next day where we would begin doing guide work with our dogs. It was a bit hard to sleep that night, but I did sleep well and then awakened to write this.

Now, a bit about Aira. Aira is a product that consists of smart glasses with a high-resolution video camera, an app on a smart phone and an agent. The idea is that I can contact an agent through a phone app. The agent receives my audio call as well as a live image stream from the camera on the glasses. The agent has been hired and trained to describe information to me. The agent truly “visually interprets”. Don’t think for a moment that Aira is used for travel only. I have used Aira to get information to put items together, find items around the house, locate food and even get information while cooking.

Aira has been around now for three years. I began as an advisor to Aira in March of 2015. I joined the staff last June as the director of strategic sales. I’ll talk more about Aira as we go along. You can read more about this incredible product at http://www.aira.io or by going through my web site, http://www.michaelhingson.com.