I was mentioned in this blog post by BY CHRISTOPHER ELLIOTT | June 5th, 2017 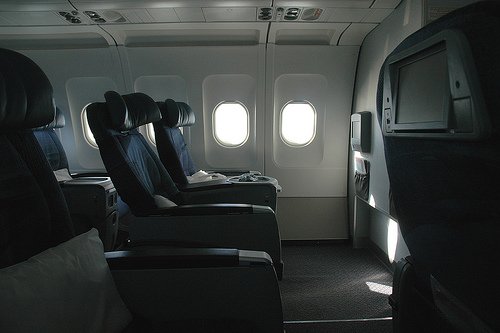 Flying with a disability is never easy, but in the past, airlines have lightened the burden a little by offering passengers such as Scott Nold advance seat assignments.

Nold, a retired bus dispatcher from Madison, S.D., who has multiple sclerosis, travels in a wheelchair. “So he requires an aisle seat,” says his wife, Deb Nold.

But on a recent American Airlines flight from Fort Lauderdale, Fla., to Dallas, their airline balked when she requested one. He could have a confirmed aisle seat in the front of the aircraft, she was told, but he’d have to pay another $36.

Not so long ago, passengers with disabilities were practically guaranteed better seats at no additional cost — usually an aisle or bulkhead seat near the front of the plane in economy class.

American eventually offered these passengers an aisle seat, but in their view, the airline should have done it immediately, without asking, “How much are you willing to pay for it?” That’s a valid point. Airlines may be making air travel unaffordable to some with disabilities because of these seat policies.

They have started exploring a rich new source of revenue by asking customers to pay for advance seat assignments. After you buy a ticket, even in economy class, airlines ask if you want a “confirmed” seat. They charge extra for the better assignments, often the kind needed by passengers with a disability. Charging extra for seat assignments has caused some confusion, most commonly among infrequent travelers, who falsely think that they don’t have a seat on the flight unless they purchase an assignment separately.

But a smaller, no less important group, is also being left behind in this seat-assignment gold rush: people like Scott Nold.

American Airlines says it complies with all applicable disability laws and that when the Nolds mentioned his disability, it offered them a middle seat and an aisle seat in the fourth row of the main cabin on their Fort Lauderdale-Dallas flight at no additional cost. They were also seated “toward the front” of the plane in seats 10 D and F on the next leg of their flight back to Sioux Falls Regional Airport on a smaller regional jet, according to the airline.

“At American, we block seats for customers with disabilities,” says Ross Feinstein, an airline spokesman.

Fortunately, there are steps that passengers with or without disabilities can take to ensure they aren’t wedged into a middle seat in the back of the aircraft. And there are laws and regulations that protect them. But at a time when airlines are unwilling to leave any money on the table, some disability experts are openly asking whether more needs to be done.

There’s a lot at stake. Suzanne Smeltzer, director of the Center for Nursing Research at Villanova University’s College of Nursing and an expert on disabilities and health care, says that being required to pay extra for a preferred seat assignment may make travel too expensive for many people with disabilities.

“Their ability to reserve their preferred seats without having fees added to the cost of their airfare may make the difference between them being able to fly safely and comfortably or not being able to fly at all,” she says.

The Air Carrier Access Act and several Transportation Department regulations that implement the law require airlines to provide seating accommodations that may provide extra space to passengers with disabilities. “However, airlines are not required to upgrade a passenger to a higher class of service in order to accommodate the passenger’s disability,” says Lori Irving, a DOT spokeswoman.

However, there’s a loophole in the law: If an airline designates certain seats as “preferred” and places them in a separate class of service, it is under no obligation to offer the seats to customers like Nold. Air travelers are now separated by elite status and fare category into dozens of distinct groups. Often, it’s hard to know where one class of service begins and another ends.

Related story:   If the price is broke …

The FAA Extension, Safety, and Security Act of 2016 requires the DOT to issue what is known as a supplemental notice of proposed rulemaking — the precursor to a new regulation — addressing, among other things, whether to expand the range of passengers with disabilities who must be afforded seats with extra legroom and whether carriers should be required to provide seating accommodations with extra legroom in all classes of service. The matter is under review.

“Airlines do not provide good training concerning disabilities,” says Michael Hingson, Vice President of the National Association of Guide Dog Users, a division of the National Federation of the Blind. “I have seen airline personnel make up rules on the fly and claim that all they are doing is enforcing FAA regulations — something which is false.”

He travels with a guide dog, who needs a little extra space. Should he have to pay extra in order for his guide dog to be accommodated?

“It can be murky,” Hingson says.

Dynah Haubert, a disability rights attorney who uses a wheelchair and flies every few months, says customers like Hingson and the Nolds are not alone.

“Increasingly, I have been coming up against seat-assignment issues when flying,” she says. She also remembers when most airlines, except the discount carriers, would allow people with disabilities to reserve those preferred seats. Not anymore.

When Haubert flew from Philadelphia to Manchester, N.H., on American Airlines recently, the customer-service staff refused to offer her a bulkhead seat, saying that their policy was to only do this for passengers with a guide animal or a fused leg. In fact, regulations require airlines to provide available bulkhead seats within the same class of service to passengers with other types of disabilities if they need it to readily access the air-transportation service.

Help is on the way. The DOT recently published general guidance on seating accommodations to help passengers understand their rights under the Air Carrier Access Act of 1986. It explains when an airline is required to give you a seat with more legroom, a bulkhead seat, a seat with movable armrests or an adjoining seat.

Disabled passengers may also benefit from a little insider knowledge. Every major airline has a department dedicated to meeting the needs of passengers with disabilities and other special needs. American Airlines actually has two teams: special assistance coordinators who can help with making travel arrangements for passengers who need wheelchairs or mobility assistance, and a disability team that helps with issues that arise after a flight. But you must let the airline know that you have a disability first, and you can do that by checking “special assistance required” when filling out your passenger details online.

Nold says she didn’t know about American’s disability services because she had always dealt with the airline by phone.

The couple’s experience may have been a simple misunderstanding. But if it wasn’t, then maybe existing laws need to be tightened — or new ones created.