This past week we lost two people I regard as real American heroes, Robin Williams and Lauren Bacall. Why are they heroes? They both lived their public lives to the fullest and they left us with legacies and memories which will stay with us for a long time. If those aren’t characteristics of a hero I do not know what is.

What is left to be said about Robin Williams? He was funny, genuine, a tremendous and versatile entertainer, and his exuberant personality left a positive mark on everyone it touched. I never met him, but I have talked with people who saw him at airports, coffee shops, nightclubs, and in most any place you might find a “normal guy”. Everyone with whom I spoke had nothing but praise about him.

Soon after I joined the staff of Guide Dogs for the Blind in 2002 I heard the story of a time just before I arrived in which Robin Williams visited the school. The staff said they had a hard time giving him a tour because he kept making them laugh everywhere they went on campus. At the end of his time he was asked what he thought of the school. His reply in his best German accent was “there aren’t enough German Sheppards here”. I heard the story six months later and I laughed.

The only other thing I can say about Robin Williams is “Robin I wish I had met you somewhere. Now, that will have to wait for another time.” 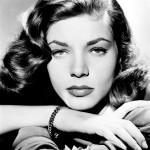 Many younger people may not know much about Lauren Bacall. In the 1940s up into the 1960s Lauren, Betty, Bacall was as famous and at least as much admired as actresses of today such as Julia Roberts. Anyone who watches “classic movies” from the middle of the 20th century knows of the sultry deep voiced sexy lady who acted opposite to the likes of Humphrey Bogart. Although 25 years younger than he, Lauren married Humphrey Bogart and had a 12 year envious life with Mr. Bogart until he died of Cancer in January of 1957. Men and women alike thought Betty Bacall, as her peers called her, was the penultimate actress and represented everything amazing about Hollywood.

Miss Bacall continued to act into her later years including appearing on Broadway. She always appeared poised and as well put together as anyone on this Earth could be. She was a great role model for all of us who observed her. She even had a humorous side. In closing I invite you to listen to a segment of a Bing Crosby radio show in which she appeared along with her husband, Humphrey Bogart, of course along with Bing Crosby, one of the best singers of the day and a well revered actor in his own right. This excerpt is one of my favorite clips from the “golden days of radio”. I hope you enjoy it and that you see why Lauren Bacall is considered by many to be “one of the classiest women of Hollywood”. https://www.youtube.com/watch?v=UxGkR6ZK47E