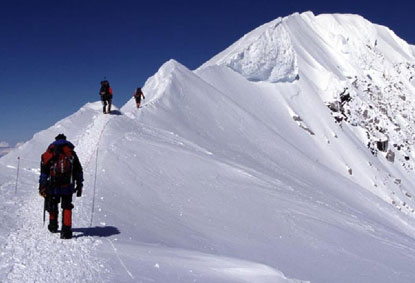 Baltimore, Maryland (January 2, 2018): The National Federation of the Blind (NFB) and the World Blind Union (WBU), which represent the United States and global blind communities respectively, today stated their opposition to a new ban on blind climbers participating in expeditions on Mount Everest, recently announced by the government of Nepal.

“The National Federation of the Blind is surprised and disappointed that Nepalese authorities have banned blind people from participating in expeditions on Mount Everest,” said Mark Riccobono, President of the National Federation of the Blind. “While we recognize that this climb should not be undertaken by the unprepared or inexperienced, the ban on blind climbers is arbitrary. The first blind person to attempt this climb, Erik Weihenmayer, summited on May 25, 2001 in an expedition that we were proud to sponsor. This proves that blindness, by itself, does not prevent a climber from safely summiting Mount Everest.”

“Blind people regularly engage in all manner of activities, both ordinary and extraordinary,” Mr. Riccobono continued. “Despite the wide-ranging evidence of our capacity, however, society continues to arbitrarily restrict what we may do, and low expectations continue to create artificial barriers that prevent us from fully participating in our communities. There is no more evidence that we should not climb Mount Everest than that we should not walk the streets with our white canes, ride amusement park attractions, or raise children, all of which are things that some have tried to prevent us from doing, but which many of us have done successfully.”

“Most blind people will never climb Mount Everest, but neither will most of the sighted. The issue is not whether a climber is blind but whether he or she has the adventurous spirit, physical endurance, and requisite skill. As in all other endeavors, we demand to be judged by whether we have qualities relevant to the task at hand, not on the single characteristic of blindness. Nepalese authorities should immediately rescind the ban on blind climbers and should reconsider banning any other climbers with disabilities,” Mr. Riccobono concluded.

Dr. Fredric Schroeder, President of the World Blind Union, said: “Climbing Mount Everest is challenging and dangerous, and it is not surprising people would assume it is too challenging and dangerous for a blind person to attempt. But Erik Weihenmayer, a blind man, did just that and did it successfully. Excluding blind and partially sighted people from equal access based on assumptions reinforces and helps perpetuate economic and social isolation. Few blind people will attempt to climb Mount Everest—as few sighted people will attempt to climb Mount Everest—but Nepalese tourist authorities should recognize that they have neither the knowledge nor wisdom to justify the exclusion of blind people from attempting to achieve the seemingly unachievable, especially since it has already been done.”

About the National Federation of the Blind

The National Federation of the Blind (NFB), headquartered in Baltimore, is the oldest and largest nationwide organization of blind Americans. Founded in 1940, the NFB consists of affiliates, chapters, and divisions in the fifty states, Washington DC, and Puerto Rico. The NFB defends the rights of blind people of all ages and provides information and support to families with blind children, older Americans who are losing vision, and more. We believe in the hopes and dreams of blind people and work together to transform them into reality. Learn more about our many programs and initiatives at www.nfb.org.