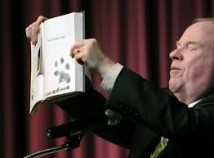 NEWPORT, OR – As many of us watched the horror of the 9-11 terrorist attacks from the comfort of our living rooms, Michael Hingson actually lived it, and will relive the story “Turning the Tables on Terrorism” at the Newport EMS Conference on April 8th and 9th, 2017.

Hingson was working as a mid Atlantic region sales manager at Quantum on the 78th floor when he heard a loud noise that shook the building he was in, which was Tower One. At the time, no one knew exactly what was happening. They just knew they had to get out of the building.

While everyone else panicked, Michael, who happens to be blind, had actually been preparing for an emergency since he first got the job. He spent time learning the layout of the building and how to escape safely if he had to. And when that time came, his partner and guide dog Roselle was there by his side to guide him out safely.

Michael’s career has taken a different path since that fateful day. He’s now an inspirational speaker, traveling the world to remind people to never forget that day in American history, when 2996 people lost their lives and over 6000 were injured.

He is also an advocate for the disabled, and will be delivering a second speech entitled “Moving From Diversity to Inclusion”, teaching EMS workers how to better handle the disabled in a crisis.

Michael is the author of two books, “Thunder Dog” (NY times #1 bestseller) and “Running With Roselle” about his late beloved guide dog Roselle, who lead him out of danger.

Michael Hingson is available for interviews and speaking engagements and can be reached through Abbott & Klein PR at 310-444-7788 or julie@abbottandklein.com.